During the next couple of years a succession of monks and anagarikas from the UK take residence, usually staying no longer than about six months. John Angelori leaves and eventually settles in Latina, where he lives to this day, and where for many years he has been leading a meditation group (www.centrosati.org).

The vihara is discovered to have major structural problems, having been built with inadequate foundations on land that is largely clay, resulting in many cracks appearing in the walls. Extensive work is done to try and shore up the foundations. Ironically, the name Thanavaro means something like ‘firm foundation’!

In the meantime Ajahn Thanavaro is teaching regularly in Rome (at the A.Me.Co) and occasionally in other parts of Italy. He is elected President of the Italian Buddhist Union in 1992. A governing body for representing the Sangha for bureaucratic purposes – the Santacittarama Association – is established and applies for official governmental recognition. When this eventually granted in 1995, the property legally belongs to the association. 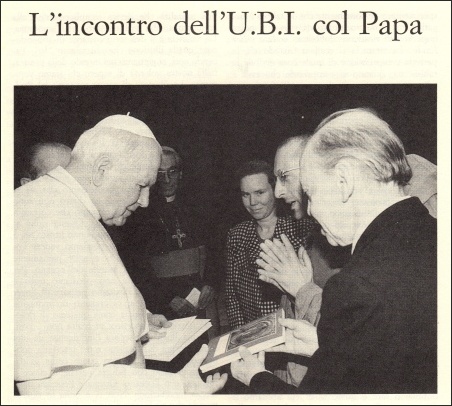 Ajahn Chandapalo arrives from the UK in April 1993, and Ajahn Preechar Jutindharo a few months later. Work proceeds in creating a 50-square-metre meditation hall on the ground floor, to host a large brass Buddha image recently arrived from Thailand, and two rooms for guests. The number of people visiting and wishing to stay for a while gradually increases, and the first of a regular newsletter is issued. Just as Ajahn Thanavaro leaves on extensive travels, the Bertolucci film Little Buddha is released, generating much interest in Buddhism. This is related in an extract from the Forest Sangha Newsletter of October 1994:

“A Little Awakening in Italy”

“Although the recent film Little Buddha was a flop in England, in director Bernardo Bertolucci’s native land of Italy it was received with great interest and anticipation and played to full houses. In their search for material on Buddhism at the time of the film’s release the media soon discovered Santacittarama and, shortly after Ajahn Thanavaro had left for a three-month trip to Australia, New Zealand and Thailand, we found ourselves giving interviews for major newspapers and radio, and appearing briefly on prime-time television. Fortunately, Venerable Dhammiko came to help out during the Ajahn’s absence, and having a native Italian speaker present was greatly appreciated. Although many of the articles were rather shallow and superficial, with whimsical titles such as “The Buddha has arrived among the artichokes of Latina” and “Tibet in Sezze”, the interest generated was very genuine and sincere. The current dissatisfaction with the ‘Establishment’ in Italy does not seem to have affected their respect for the spiritual life and religious teachings. The locals were very impressed with the amount of attention given to their Buddhist monks and the only Theravada monastery in Italy, and rumours were soon rife that the world famous football player, Roberto Baggio, widely known to be a Buddhist, was doing a retreat there!”

In October of 1994 Ajahn Chandapalo and Jutindharo depart from Sezze on foot with the intention of walking all the way to Naples, depending only on almsfood. Within about ten days they had made it as far as Castel Volturno, not far north of Naples, from where they were talked into finishing the journey by car. Here is part of their account that was published in newsletter n° 6 in December 1994:

“Ajahn Chandapalo and Ven. Jutindharo returned foot-sore but cheerful from Naples, after their first attempt to re-introduce the wandering mendicant tradition to Italy. Their first night away from Sezze was spent at Fossanova Abbey (where St. Thomas Aquinas spent his last years). The resident Franciscan friars – all Polish – were very hospitable and quite curious. Most subsequent nights were spent outdoors, using sleeping bags with ‘waterproof’ covers, once on a mountain slope and then between Terracina and Castel Volturno on beaches. Sometimes kind friends brought food out to them, occasionally they received offerings on almsround and other times they just soaked up the sun-rays and took some deep breaths! 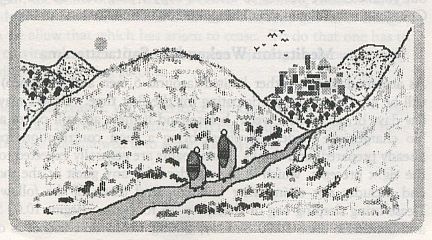 Fortunately the weather was mostly kind, apart from a very heavy thunderstorm which disproved the waterproof cover theory. Contact was made with many sympathetic, curious and kindly people throughout the journey; an impressive number recognizing Buddhist monks! After completing the last short stretch by car several days were spent in Naples, meeting a large number of Thais in the area as well as Italians and others interested in Buddhism. Khun Porntip very graciously made her apartment in Agnano available as a ‘vihara’ for the weekend….” 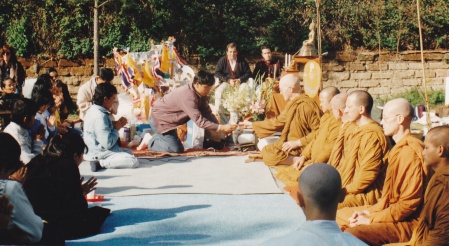 Around this time the work on the ground floor is completed, and a kuti constructed at the bottom of the garden, thus increasing the accommodation for sanga members as well as offering opportunities for solitary retreat. In November of 1994 we are delighted to host our teacher Ajahn Sumedho, as well as two other abbots: Ajahn Anek from Thailand and Ajahn Tiradhammo of Dhammapala monastery in Switzerland. One noteworthy event that takes place during their stay is the taking of the anagarika precepts by Roberto, originally from Palermo, the first Italian to train at Santacittarama as a white-robed postulant. 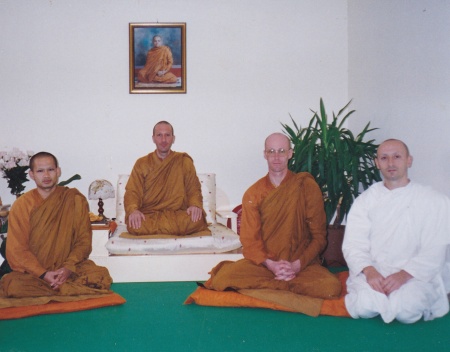 Continue the history with  “4. New Plans“