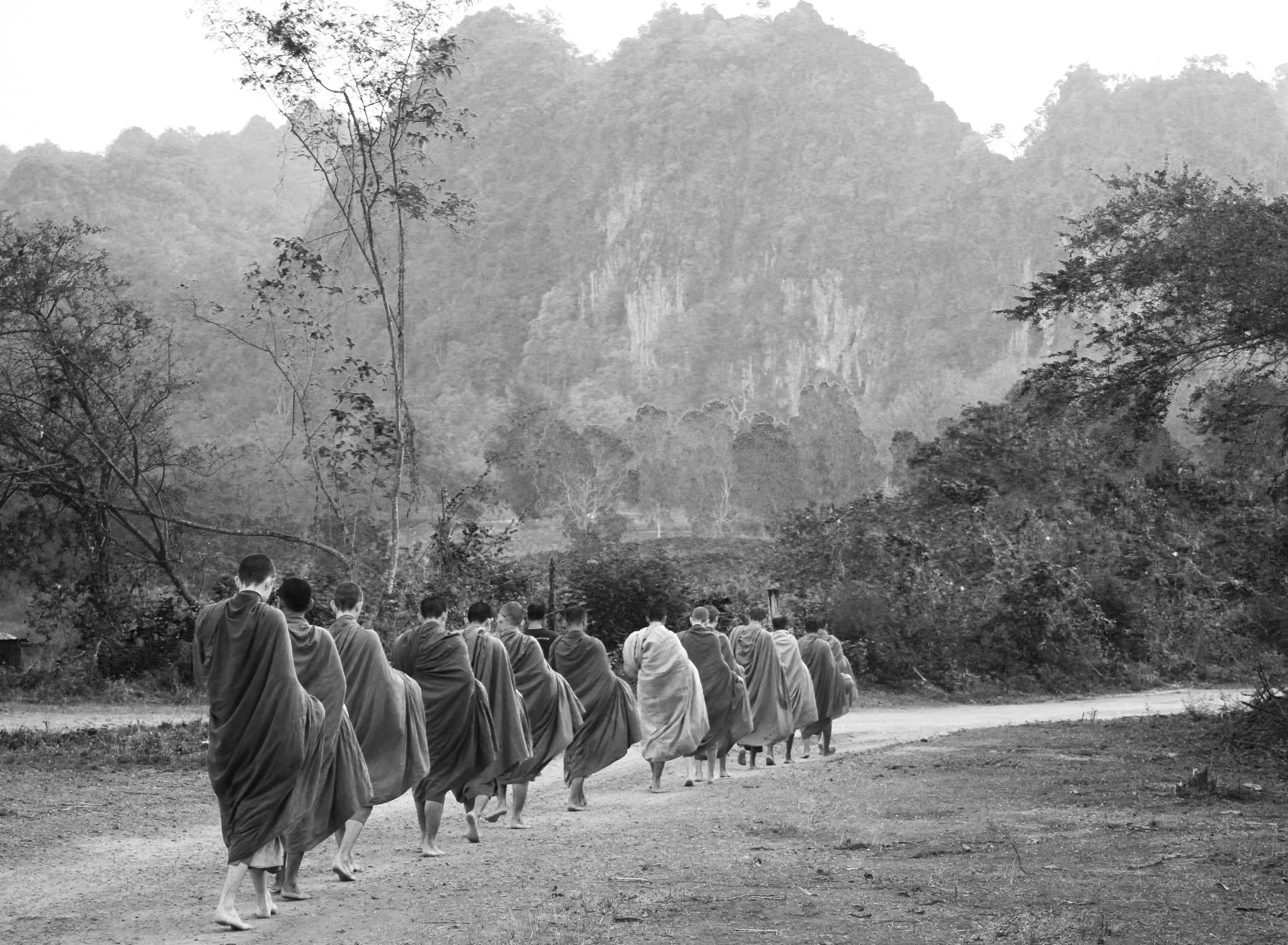 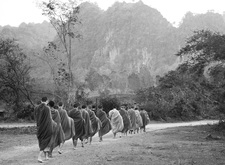 The Thai Forest tradition is one branch of the Theravada Buddhist tradition. Theravada Buddhism, also known as the Southern School of Buddhism, is present throughout Thailand, Burma, and Sri Lanka. The Theravada tradition is grounded in the discourses recorded in the Pali Canon, the oldest Buddhist scriptures. Theravada literally means the Way of the Elders, and is named so because of its strict adherence to the original teachings and rules of monastic discipline expounded by the Buddha.

The Theravada Buddhist tradition within Thailand is composed of many different strands and types of monasteries. Most villages and towns in Thailand have at least one monastery, which might serve as a place for ceremony, prayer, cultural activity, education and medicine. Thai monasteries differ widely and express a range of functions and approaches to monastic life. Some monasteries focus on chanting and ceremonies; some on study and intellectual pursuits; some on healing and blessings; some on practice and meditation and some cater to local superstition and magic. In addition to varying in their approach to monastic life, different monasteries also vary widely in terms of how strictly they uphold the Buddhist code of monastic discipline, called the Vinaya.

The Thai Forest tradition is the branch of Theravada Buddhism in Thailand that most strictly holds the original monastic rules of discipline laid down by the Buddha. The Forest tradition also most strongly emphasizes meditative practice and the realization of enlightenment as the focus of monastic life. Forest monasteries are primarily oriented around practising the Buddha’s path of contemplative insight, including living a life of discipline, renunciation, and meditation in order to fully realize the inner truth and peace taught by the Buddha. Living a life of austerity allows forest monastics to simplify and refine the mind. This refinement allows them to clearly and directly explore the fundamental causes of suffering within their heart and to inwardly cultivate the path leading toward freedom from suffering and supreme happiness. Living frugally, with few possessions fosters for forest monastics the joy of an unburdened life and assists them in subduing greed, pride, and other taints in their minds.

Forest monastics live in daily interaction with and dependence upon the extended community. While the laity provide the material supports for their renunciant life, such as almsfood and cloth for robes, the monastic Sangha serves as a resource for spiritual inspiration and guidance. The conduct of Forest monks is governed by 227 protocols which include total celibacy, eating only between dawn and noon and abstaining from handling money. They also commonly engage in a practice known as ‘tudong’ in which they wander on foot through the countryside either on pilgrimage or in search of solitary retreat places in nature. During such wanderings, monks sleep wherever is available and eat only what is offered by laypeople along the way.

Significance of the Forest Tradition 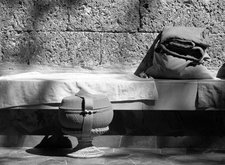 The Forest tradition began in the time of the Buddha and has waxed and waned throughout Buddhist history. Actually, the Forest tradition in one sense even predates the Buddha, as it was a common practice of spiritual seekers in ancient India to leave the life of town and village and wander in the wilderness and mountains. The Buddha himself joined this tradition at age twenty-nine, giving up his life as a prince in order to seek the way beyond birth, aging, sickness, and death.

The Buddha was born in the forest, enlightened in the forest, taught in the forest, and passed away in the forest. Many of his greatest disciples, such as Venerable Añña Kondañña and Venerable Maha Kassapa, were strict forest dwellers who maintained an austere renunciant lifestyle. The Buddha allowed determined forest-dwelling monks, such as these two, to cultivate thirteen special practices, called dhutanga practices, which limited their robes, food, and dwelling places. These special renunciation practices, along with the practice of dwelling in nature provided the fundamental backdrop for Forest monasticism throughout Theravada Buddhist history.

Many of the Buddha’s disciples chose to live in forest wilderness areas because their ruggedness and danger provided excellent arenas for spiritual training. In addition to the tigers, snakes and other challenges of wilderness dwelling, there was also the simplicity and natural beauty which afforded a suitable setting for pleasant abiding and joyful meditative concentration. Furthermore, by living in the forest, the monks were able to set a positive example for future generations.

The practices of these early forest dwellers exemplified the path to liberation. Since the time of the Buddha and his early disciples, the discipline of the monastic order and the integrity of the Buddha’s teachings have experienced numerous cycles of growth and decline. Throughout these cycles, the original ethos of the Buddha’s teachings has been preserved both through the example of these early forest-dwelling disciples and also through the efforts of later monastics who also focused on meditation practice, simplicity, and renunciation.

The way of practice, the teachings, and the codes of monastic conduct which the Buddha expounded 2,500 years ago, run deeply against the grain of worldly concerns such as material success, wealth, power, fame, pleasure, and status. The presence of a monastic order can be a great boon to a society by providing a source of wisdom, peace, and clarity that transcends these worldly concerns. Alternatively, however, worldly concerns can enter into and distort monastic life. Historically, one way this has happened is when monks and nuns focused on meditation become accomplished in their practice, and then become well-known teachers, drawing to their monasteries many visitors bearing gifts and offerings. The very success and reputation of these teachers draws wealth, power, and fame into the monastery. Without constant heedfulness, the ways of the world might then enter into the monastic order, generating corrupt and obese monastic institutions. In such times, the practice of Forest monasticism by wise teachers concerned with spiritual living, discipline, and meditation, rather than institutional rank and official responsibility, plays a crucial role in revitalizing the original ethos of the Buddha’s teachings. 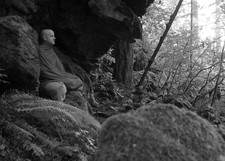 By the middle of the nineteenth century, Buddhism in Thailand had generally become corrupted with lax monastic discipline, teachings straying from the original texts, little emphasis on meditation, and a widespread belief that spiritual accomplishments were no longer possible. In the midst of this waning tradition, determined Buddhist practitioners returned again to the basics of forest living, moral discipline, and meditation in search of the Buddha’s path to enlightenment. The spiritual determination and accomplishments of these forest practitioners led to the emergence of the contemporary Forest tradition in North-east Thailand. The North-east is one of the most remote and poor areas in Thailand, notable both for its harsh land and its remarkably good humored people; and more recently for its wise meditation masters.

The emergence of the contemporary Forest tradition is associated largely with Ajahn Mun and his teacher, Ajahn Sao. Both were the sons of peasant farmers in the North-East of Thailand. Ajahn Mun was born in the 1870s in Ubon province near the borders of Laos and Cambodia. He trained under the forest monk Ajahn Sao, vigorously practising meditation, and then turned to a life of ascetic wandering and meditation practice in the wilderness. Ajahn Mun became a great teacher and exemplar of high standards of conduct. Almost all of the accomplished and revered meditation masters of twentieth century Thailand were either his direct disciples or influenced by him. One of these great meditation masters following in his example was Ajahn Chah. 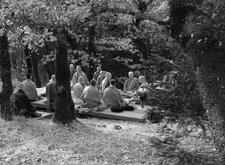 Ajahn Chah’s style of teaching and personality had a unique ability to reach people of other nationalities. Many foreigners came to learn from, and train under with Ajahn Chah. The first of these was the American-born monk, Ajahn Sumedho. In 1975, a group of Ajahn Chah’s foreign disciples were asked by villagers not far from Ajahn Chah’s monastery to start a new branch monastery. Ajahn Chah agreed, and established Wat Pah Nanachat (International Forest Monastery) near the village of Bung Wai as a monastic training centre for internationals. Since that time, Wat Pah Nanachat has become a respected Forest monastery and has opened up additional monastic retreat centres, including some in remote forest and mountain locations. Throughout the main monastery and these additional centres, Wat Pah Nanachat currently includes under its umbrella over fifty monks representing twenty-three nationalities.

In 1976 the English Sangha Trust invited Ajahn Sumedho to establish a Theravada monastery in London. Along with a small group of monks, Ajahn Sumedho heeded the request and established the first branch monastery in Ajahn Chah’s lineage outside of Thailand. Since that time, a number of Ajahn Chah branch monasteries have been created throughout England, France, Australia, New Zealand, Switzerland, Italy, Canada and the United States.

This development has included the establishment of a community of nuns, (siladhara). The first residence specifically for nuns was set up in 1980 as part of Chithurst Monastery and the second was in 1984 as part of the Amaravati community.

These monasteries, under the guidance of many of Ajahn Chah’s senior Western disciples, are allowing the example of Forest monasticism to spread westward. They are supporting the direct and simple practice of the Buddha’s original teachings, as it has been preserved in the Forest tradition for 2,500 years, to accompany Buddhism as it more generally transfuses throughout and adapts to the Western world.

These monasteries are initiated only at the request of the lay community and are supported entirely by the lay community’s generosity. They are making available the direct and simple practice of the Buddha’s original teachings to a broader spectrum of humanity.