A major change in the community of Santacittarama is announced by Ajahn Chandapalo in their newsletter of May 1996:

“Six months have passed since our last newsletter and quite a few things have happened during this time. I was very fortunate to spend much of this last winter in Thailand, partly at the International Forest Monastery near Ubon where our teacher, Ajahn Sumedho, led a retreat for the monastic community. Before returning to Italy I met up with Tan Jutindharo and we had a very pleasant two weeks together in a forest wilderness retreat, very close to the Burmese border, in the Kanchanaburi province famous for the ‘Bridge over the River Kwai’. I would like to express my gratitude to those who made this trip possible, who contributed to my ticket and helped in various ways during my stay. It was indeed a very beneficial experience and gave me the strength to face what was, at first, a rather sad situation awaiting me at Santacittarama.

On returning at the end of February Anagarika Roberto had just left after exceeding his one year’s commitment and deciding to return to laylife in Palermo. Our best wishes go to him – we will remember him for his gentle and cheerful presence, his willingness to serve and the good example he set for other guests.

A few days later Ajahn Thanavaro left for England, where he took leave from the Sangha and formally gave up the bhikkhu training. This was not a sudden decision, but part of a difficult process that he has been going through during the last couple of years. His commitment to spreading the Dhamma to an ever-growing audience was gradually drawing him away from the monastic life. Finally the pressure of trying to maintain both became too great and he decided to disrobe. This was certainly not an easy decision on his part, and one that he is still coming to terms with, given the effect on the many people who have come to know and love him over the years.

For those familiar with the early days of the community in England, Ajahn Thanavaro will be remembered as one of the first bhikkhus to be given Upasampada (acceptance into the bhikkhu life) in England on a boat in the middle of the river Thames. I remember first seeing him at a Vesakha Puja gathering in Manchester in 1978, and three years later being together with him and Ajahn Sucitto at Harnham, near Newcastle, the first branch monastery of Chithurst. In 1985 he went to New Zealand with Ajahn Viradhammo to establish the Bodhinyanarama Monastery, and for the last six years he has been responsible for Santacittarama in Italy.

Being the first resident Theravada bhikkhu in Italy presented quite a challenge, but one that he gave himself to with a pioneering spirit and without regard for his own well-being. As a result of this he became well-known and loved throughout the country as a teacher of retreats, counsellor, author of two books and as President of the Italian Buddhist Union, a position that he has been invited to continue at least until the end of the three year term. The Sangha hopes that the virtuous deeds that he has cultivated during his bhikkhu life will serve to protect Mario (as he wishes to be known) during this time of transition.

[One can read Mario Thanavaro’s own account of his life as a monk and the early years of Santacittarama here:amitaluceinfinita.it]

In April I was invited to join an ‘Elder’s Council Meeting’ of senior monks at Chithurst in England, and was asked about the present situation at Santacittarama. Assuring them that I was happy to remain here, and that there are promising signs of continued support for the monastery and interest in the Dhamma, the Sangha approved of my taking responsibility as the senior incumbent. It was also agreed that the project of establishing a new location for Santacittarama should go ahead. I have been encouraged to keep in close contact with the Sangha in England and to maintain as my priority the living of the monastic life, thereby offering a suitable environment for those who wish to share it, whether for short or long periods. Therefore I intend to limit any teaching activities to the Rome/ Napoli area and to invite those who have the opportunity and inclination to spend some time practising with us at Santacittarama. 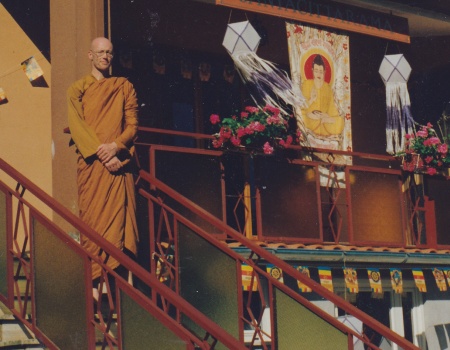 Tan Jutindharo returned towards the end of March, very considerately cutting short his stay in Thailand in order to support the continued development of Santacittarama. This is something that two bhikkhus cannot do alone, but which needs the goodwill and assistance of many people. All contributions, however humble, are much appreciated – such as offerings of food (we generally eat only what people happen to bring) and requisites, help in the garden, cleaning, cooking, shopping, office work, translating, transporting and so on. Or just being a peaceful presence, someone who is skilfully using their time for developing the path, and being a good example for others.

Having completed three years at Santacittarama my Italian, if not fluent, is now at least usable – I have given talks, guided meditations, led a weekend retreat and talked to many, many visitors. I enjoy living in Italy and am grateful for this wonderful opportunity to practise the Dhamma with like-minded people in a country that is ripe for the teachings of the Lord Buddha. We hope that the presence of the Triple Gem will continue to be of benefit for this generation and many to come.”

In the meantime the search for a new property continues as recounted in the same newsletter:

“Our search for larger and more secluded premises for Santacittarama, as announced in the last newsletter, continues. We have investigated several possibilities in the Sezze area but, as nothing suitable was found, we are also beginning to look further afield. The areas immediately north and east of Rome look most promising, both for availability of suitably isolated properties in attractive countryside and for good road and rail connections. Ideally we hope to find several hectares of land, perhaps partially wooded, either with some building that could be adapted for monastic use or with the possibility to construct something suitable. The Alms-Giving Ceremony held in the Thai Embassy last November was very well attended, and we were honoured with special guests Luang Por Tong, one of the most important monks in northern Thailand, and Ajahn Viradhammo from England.”

Continue the history with  “6.  New Year“