New plans are announced in the Santacittarama newsletter of October 1995:

“A major cause for concern since the Vihara’s inception has been the inadequate nature of the building’s foundations and the continual appearance of cracks in the walls due to seasonal movement. It is a little premature to say with any certainty but there is optimism that, after a lot of expensive building work, this problem has been resolved. This means that the house would now be saleable if it was ever decided to transfer to another property, which brings us to the main point of this letter. 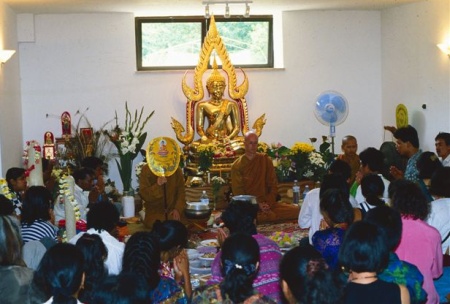 Anyone who has been to Santacittarama will be aware of its limitations as a meditation monastery of the forest tradition. Until the present time, however, it has served us well enough and, despite their doubts, people have continued to support it. This deserves a note of commendation. With the ground floor converted into a meditation hall and accommodation facilities, the limit of possible expansion has been reached, and yet with the recent explosion of interest it is already somewhat inadequate. An increasing number of people are requesting acceptance as long-term members of the community, some as anagarikas (postulants) with the possibility of training for future ordination. Women guests have endured, with little complaint, rented accommodation on a rather busy and noisy road and a very steep climb to the Vihara. The Vihara and its garden is looked down upon by houses at close proximity on two sides, giving little privacy or seclusion. Without the immediate prospect of any alternative we have learned to live quite happily in this situation, and being relatively free of work projects we have been able to put more time and energy into formal meditation practice. A welcome opportunity! However, it has been apparent for some time that the present Santacittarama has reached its full potential, and that eventually we would have to start thinking in terms of looking for a somewhat larger and more secluded property.

A group of dedicated Thai supporters have, after consultation with the Sangha, initiated a project which aims to raise sufficient funds to establish a ‘Santacittarama Forest Monastery’. By November of this year they hope to be in a position to purchase a suitable plot of land on which a monastery can be built when further funds become available. These they hope to raise by organizing a special Kathina ceremony, with invited guests from Thailand, in October or November of next year, 1996. In the meantime the Royal Thai Embassy in Rome has very generously been offered as a venue for an alms-giving ceremony on 19th November of this year, which will provide an opportunity to meet the Sangha and to find out more about this project. For this plan to succeed, it will need the support of many, many people and all are invited to contribute, in whatever way they are able. Participation is not limited to Thais but is open to all nationalities; once completed Santacittarama Forest Monastery will serve the general Buddhist community, regardless of country of origin…

We are beginning to look for land in the area immediately around Sezze as we are well established here and have a very good relationship with the local people; we also wish to honour the original intention of being accessible from both Rome and Naples. Already there is one possibility being looked into – a nine hectare plot of land, a bit less than half forested, with a modern bungalow, and a dilapidated building reputed to be a former friary! Before a decision is made, however, many aspects need to be carefully considered, and this is likely to be a slow process.

Continue the history with “5. Changes“