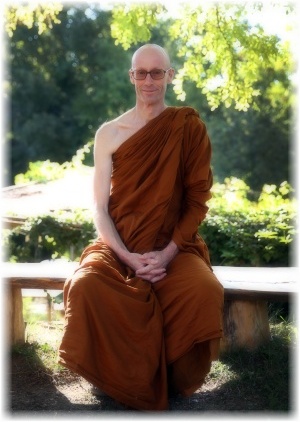 Born in Preston (UK) in 1957, Ajahn Chandapalo grew up in York and initially became interested in Buddhist meditation while studying engineering at the university of Lancaster. His first experience of traditional Theravada Buddhism was at a Vesak celebration led by Ajahn Sumedho in Manchester in 1978. While studying for a master’s degree in biomedical engineering at the university of Dundee the following year, he met Ajahn Chah in Edinburgh. After working for a brief period in the Bioengineering Unit in Glasgow he decided to begin monastic training at the newly-established Chithurst Monastery in West Sussex, and took the eight precepts there as an anagarika (postulant) in 1980.

The following year he assisted Ajahn Sucitto in the establishment of Harnham monastery (now known as Aruna Ratanagiri) near Newcastle. He was received into the bhikkhu sangha (monastic order) in1982 at Chithurst and a year later accompanied Ajahn Munindo in the founding of a new branch monastery in Devon. After a year there he relocated together with Ajahn Sumedho and several other monks to a former residential school near Hemel Hempstead that became Amaravati monastery. In 1988 he was invited to Switzerland with Ajahn Tiradhammo and remained there for more than two years, contributing to the establishment of Dhammapala monastery. On being offered a ticket to Thailand he spent a year at Wat Pah Nanachat, the international monastery, and associated hermitages.

In 1993, at the invitation of Ajahn Thanavaro, he moved to Santacittarama, which had been established three years earlier in Sezze Romano, south of Rome. When Ajahn Thanavaro returned to lay life in 1996 he assumed the role of senior incumbent of the monastery, which relocated to Poggio Nativo the following year. Together with Ajahn Amaro he was officially granted the status of a “preceptor” (upajjhaya) by the Thai Sangha in 2011, and was thus authorized to preside over the acceptance ceremony of suitable candidates into the monastic order. He teaches regularly in various parts of Italy and occasionally beyond.